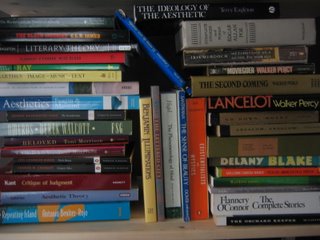 These are some of the books I am to have committed to memory enough to handle an exam on them by the end of next week or so. I'm not allowed to refer to them during my exam, of course. Hence-- the "forbidden bookshelf." It also sounds so... daunting. There are others, of course, but they're in the library. I can't buy everything I'm supposed to read. I'd be totally broke.

After a 20 minute meeting or so this week, my committee and I have decided that I will be examined for my Masters in passing April 25. What this means in practical terms is that I have to have the written answers to my exam questions in to the committee members 10-14 days earlier. Which means I will be receiving those questions either next week, during spring break, or immediately after it. This makes me very, very nervous. There are an awful lot of books on my list, and I'm expected to know them all.

Here's how the process works: I have three areas of knowledge on which I'm to be examined-- in my case it's Southern U.S. Literature, The Caribbean and Aesthetics. On a determined day at a determined time, the committee chair will email me the first question. I will not know in advance which of the three areas it is to cover. I have three hours to answer and email it back (thus giving it a time-stamp within three hours). Then the next day I receive question two, and the same gig follows. Ten-15 days later, I am examined on my answers to the written questions, and then on the third field which the questions didn't cover.

Whew. I'm trying to arrange the subjects thematically, so that whatever I'm asked, I'll be able to respond. I have a sort of continuum going with Cesaire-Glissant-Walcott-Ferrer-Harris-Chestnutt-Morrison-Faulkner-Marquez-Cable-Kant-Schiller-Hegel. I think that with a few themes I'm not going to set out here, I may have found a way to field most questions. Did I mention that I'm not allowed to consult books or notes during the exam? That I have to know this material well enough to call it up on command?

At least it will be done April 25, at which point I plan a long drinking binge.
Posted by Raimbaut D'Aurenga at 11:02 AM No comments:

Recovery workers are still finding bodies in the debris-strewn wasteland of the Lower Ninth Ward. Here's a quote from the article in today's Times Picayune:


Glynn said it is hard to tell how long the recovery efforts will take. Recovery workers have to be painstaking as they clear away sludge and debris in a house or a debris pile so that human remains aren't overlooked.

"A lot of people don't realize, they are surprised that we're still finding bodies -- the first workers who showed up after the storm were rescue workers, and they really were looking for survivors, not dead people. And they didn't have a list like we do of missing people, and it was so difficult to get through these houses sometimes, they just had to call and listen for a reply. You see how many times you see they wrote NE on the houses -- that means no entry. So no, it doesn't surprise me that we are finding people still."

It wouldn't surprise me if we never find the remains of all the people killed in the floods. It's information like this that tends to stun my friends from out of town, who don't really realize just how bad it still is in New Orleans.
Posted by Raimbaut D'Aurenga at 9:25 AM No comments: 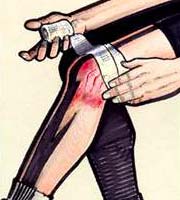 Here's the situation: tired after making special allowances for slacker students to take their spoken exams, biker races to relaxing session on climbing wall. A little indoor bouldering, a little goofing off, and all will be right with the world.

It's been raining, and the pavement is wet. As the biker nears the sharp left turn he has to make to get to the rec, he notices oblivious young coed opening door of luxury vehicle. To dodge a dooring, he turns early, but not unmanagably so. He cants the bike left. Big, but not unmanagable.

Did I mention it had been raining all day? Did I mention he was on the wet pavement? Oh, and did I mention his bike was rocking the touring slicks that make his daily ride such a pleasure?

He makes the turn. His wheels make deep swooshing sound-- like sliding through wet snow. Biker makes graceful, swift, 30-foot slide on pavement. He pops up, like a football receiver who just took a bone-jarring tackle. He assures the gape-jawed coed that he's just fine, thanks for asking. And he goes into the building for his climb.

But biker has road rash. He should write ROAD RASH. It runs from left knee halfway down the front of left shin. Also, biker has unshaven, hairy, Chewbacca-style legs. Gravel and dirt and hair all up in that road rash, which required extensive cleaning with brush and tweezers.

And let me reiterate..

Leg now debrided (as well as I could without convincing the neighbors I'm into some kind of self-torture), swabbed in Povidone and bandaged up with Telfa pads.

I will now drink the half-bottle of Ravenswood zin. It will help me feel better while I watch basketball. And it is the delicious. (Yes, I've already started...)

And I will whimper softly to myself.

Now, just my pride hurts. I HATE falling on my bike.
Posted by Raimbaut D'Aurenga at 9:40 PM No comments: